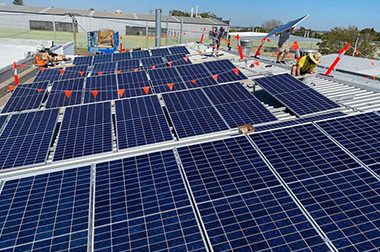 Solar power is one of the cleanest, cheapest, and most reliable sources of electricity.  It has been around long before there was any other form of energy production.  Solar panels are an invention that converts sunlight into useable electric current to replace fossil fuels.  They are very efficient since they can convert up to 25% of the sunlight shining on them into electricity with no moving parts, unlike wind turbines which only have a 5-6% efficiency rate at converting wind energy to electricity with large blades spinning in the open air. This means that solar panels produce higher outputs for less cost than wind turbines while also being much quieter, safer, and more reliable over time even when faced with harsh weather conditions like high winds or snowstorms because they don’t need gears and blades to keep spinning.

Solar panels are far superior to other forms of electricity production because they can be placed anywhere and produce energy even when there’s no direct sunlight because the cells in them collect and convert sunlight that falls on them over a large area, unlike other sources like wind turbines which need an unobstructed space at least as wide as its turbine long blades for it to work properly. Solar panels also make little noise while producing power, unlike coal-fired or nuclear power plants where constant thrumming is heard from the engines used to power the generators.

Solar panels are a great investment

Solar panels are a great investment because they will save you money in the long term. Solar energy is one of the cleanest and most abundant sources of energy on Earth, and there’s no end in sight for solar panel production or demand! Investing in solar can be cost-effective if you take into account that the average household spends about $1,500 on electricity per year. Solar panels can help reduce your electric bill by up to 90%. That means that with an initial investment of around $8,000-$12,000 (depending on size), you could make your money back within 5-7 years at the latest. And once all costs are considered – after paying off any loans taken out to purchase equipment – some homeowners have saved up to $25,000 over 25 years by switching to solar energy!

You’re doing your part to save the environment

Solar power is one of the most promising forms of renewable energy, and it may just be coming into its own. It’s been around for decades, but until recently solar panels have been prohibitively expensive. They generated electricity at a rate that was too low to compete with coal or natural gas plants, which are cheaper because they don’t require any fuel. But now prices have fallen so much that in some places you can generate enough electricity with solar panels to sell back to the grid for more than you pay for it! This is great news not only for your budget but also for our environment. Solar panels produce no pollution or greenhouse gases when generating electricity-only clean water vapor when they’re cleaning themselves after a dusty day in the sun!

It’s good for the economy and creates jobs

Solar panels are an easy way to help the environment and save money. Many people have been investing in solar panels because it’s a great way for them to take care of their homes, while also taking care of the planet. Solar power is good for the economy and creates jobs. It can be installed on rooftops or ground-mounted systems, depending on how much space you have available. The best thing about this type of energy is that it’s renewable – so once you’ve paid off your investment, there’s no need to worry about paying monthly bills again!

Solar panels might seem expensive at first glance, but they’re actually quite affordable when you consider all the benefits they offer: not only do they produce clean energy with virtually no impact on the environment, they also save homeowners money. And because of technological advances, prices are dropping all the time. Depending on your electricity bill and how many panels you need, you could start saving hundreds of dollars every month after just one year of installation!

Solar power is good for the economy because it creates jobs in manufacturing, installing, and maintaining solar panel systems. Solar panel manufacturing plants require skilled workers to assemble complex components into efficient systems that can be installed anywhere without too much difficulty. After installation, technicians will perform maintenance checks so everything runs smoothly over time. The more solar energy installations happen around the world, the more people there will be working at these plants and companies – this means more jobs for everyone involved!

Solar is more affordable than you think, with many solar providers offering free installation and low monthly rates

Solar power is a much more affordable and accessible source of energy than you may think.  With so many solar providers offering free installation and low monthly rates, it’s never been easier to switch over to the sun as your preferred fuel source. Solar is also an attractive option for those who want to save money on their electricity bills without giving up all the modern comforts they love like air conditioning or hot water. And with solar panels coming in such sleek styles these days, it’s easy to incorporate them into your home design plans without sacrificing any style points! If you’re ready to start living greener and save some cash too, check out this article for more information about why going solar makes sense both financially and environmentally!

The cost of electricity keeps going up, but luckily for you, there are ways to save money on your electric bill. One way is to switch over from traditional energy sources like coal and gas-powered plants to solar power. Solar power has been around since the 1800s when it was originally used in rural areas where other forms of electricity were not available or too expensive. Nowadays, solar panels can be installed anywhere because they require no fuel and produce zero emissions. If you live in a place with a lot of sunlight throughout the year, then this could be an excellent option for you!

Solar panels work by converting the sun’s radiation into electrical current that is then stored in batteries for use at night or when clouds prevent direct sunlight. There are two types of solar panels: thin-film panels and rigid. Thin film is the cheaper option, but it is also less efficient than rigid panels. Installing thin-film requires more space to be effective, whereas rigid panels only take up a small amount of space because they are constructed into roof tiles or shingles.

Why should I consider going solar instead of paying a monthly electric bill?

There are many reasons to go solar. For one, you’ll save money and reduce your…

What Exactly are Solar STCs?

When you're researching in depth into solar panel installation in Queensland, you'll come across a…