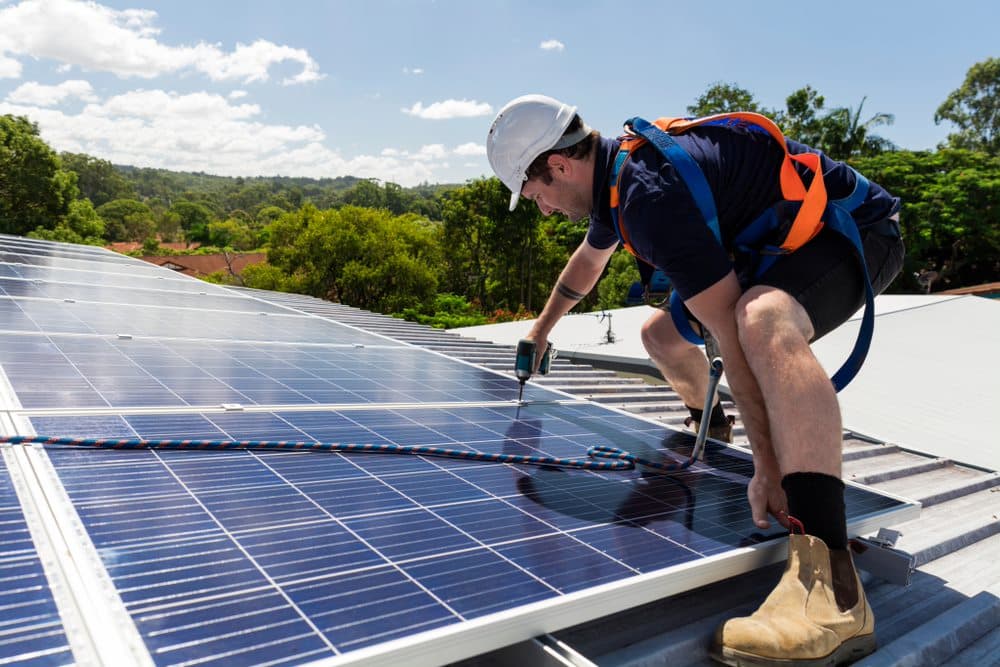 Solar panels are a device that converts light from the sun into electricity. The most common type of solar panel is made up of photovoltaic cells, which convert sunlight directly into an electric current. Solar panels can also be categorized in two other ways: active and passive. Active solar power systems use a motorized tracking system to keep them in the path of the sun’s rays while passive systems do not move and must be manually turned to follow the sun’s movement across the sky. Solar panels come in many different shapes, sizes, and forms such as monocrystalline or polycrystalline silicon cells that have been cut into wafers; thin-film modules made from layers of semiconductors like cadmium telluride, copper indium gallium selenide (CIGS), and amorphous silicon; or concentrated photovoltaic systems that use lenses or mirrors to focus sunlight onto small, high-efficiency cells. The efficiency of solar panels is measured by their wattage rating. The higher the wattage, the more electricity the panel will produce. Solar panels are also rated by their voltage and amperage. The voltage is the amount of electricity the panel produces and the amperage is how much current the panel can generate.

SolarSolar panels come in a variety of shapes and sizes

Solar panels come in a variety of shapes and sizes.  The shape you buy should depend on where you live or what your needs are for the solar panel. There are different types of solar panel shapes that you can purchase to save money and have a better understanding of how they work. For example, there is a sun-tracking system that moves to follow the sun’s path across the sky throughout the day so it can capture more sunlight than fixed-in place panels do; these systems cost more but provide up to 20% increased energy output compared with fixed-in place alternatives. However, there are other factors involved in choosing an appropriate solar panel system including time of sun exposure, geographic location, local weather conditions, and more. Each individual must choose the right solar panel system based on their specific needs for them to function effectively and efficiently when used together as part of a solar power energy system.

There are three different types of solar panels – monocrystalline, polycrystalline, and amorphous

Solar panels are devices that collect sunlight and convert it into electricity. There are three different types of solar panels – monocrystalline, polycrystalline, and amorphous. Monocrystalline silicon cells are the most expensive type of panel but they also produce more power per square inch than any other kind. Polycrystalline cells are cheaper to manufacture because they use less silicon but have lower efficiency rates on average. Amorphous panels have an efficiency rate somewhere in between the two other types, making them a good option for homeowners who want to minimize their costs while still getting a decent amount of power from their system.

Monocrystalline panels are the most efficient

It is often said that the most expensive solar panels are also the most efficient. This is not true. Monocrystalline panels are more costly to manufacture, but they produce significantly higher efficiencies than polycrystalline or amorphous silicon cells, which are cheaper to produce and have lower efficiencies. The cost of production can be reduced by using less expensive materials in the manufacturing process, while still retaining high-efficiency levels for monocrystalline cells.

Polycrystalline solar panels are one of the most common types of photovoltaic cells in use today, primarily due to their relatively inexpensive manufacturing process. They can also be made into flexible sheets which makes them a good choice for low-cost roofing as well as other applications that require flexibility or portability. Polycrystalline cells have some drawbacks, however: they tend to lose more power when it’s cloudy outside, and they produce less electricity during winter months because light from the sun has been filtered through more air on its way down. Still, these disadvantages are outweighed by their benefits: polycrystalline cells generally last longer than monocrystalline investment, and their lower price point makes them good for homeowners looking to go solar.

Amorphous silicon is less expensive than other types

The use of amorphous silicon in the production process is a relatively new development for solar cells. It has been found that this type of silicon can be used to produce higher quality and more efficient solar cells at a lower cost. Silicon, which is the most common material used in solar cells, can come from different sources such as quartz sand or rocks that contain high-purity silica. Quartz sand, which is typically mined from beaches and deserts, contains impurities such as aluminum oxide and magnesium oxide that have to be removed before being used for making photovoltaic devices. Rocks containing high-purity silica are found in regions containing granite. Silicon is the second most abundant element on Earth; however, it doesn’t occur naturally as a metal because it’s very reactive and readily forms compounds with other elements.

The sun gives life to Earth, and it can give you electricity too. Solar panels convert sunlight into electricity via photovoltaic cells embedded in each panel’s surface area. There are three types of solar panels: flat-panel (mono- or polycrystalline), tubular (amorphous silicon), and concentrator (the most expensive type which uses lenses to focus light on small areas). All three types produce electricity by converting sunlight into electrons that flow through wires connecting the cells. The type of solar panel you choose depends on your budget and how much sun exposure you get. If you’re looking for the most affordable option, go with a flat-panel solar panel. They are less efficient than the other types, but they’re also the least expensive. Tubular solar panels are more efficient than flat panels, but they’re also more expensive. If you have a lot of sun exposure, consider investing in a concentrator solar panel. They’re the most efficient type, but they also require the most sunlight to operate.

No matter what type of solar panel you choose, make sure to research your state’s rebate program and tax credits available to homeowners who install solar panels. You may be able to get a significant discount on the cost of your solar panel system by taking advantage of these programs. Now that you know all about solar panels, it’s time to decide if they’re right for you. Do some research and talk to a few solar panel installers to find out what type of system would work best for your home. With the right system in place, you can start generating your electricity and saving money on your energy bills.

Are Solar Panels Worth the Investment?

Solar panels are a great way to help the environment and save money. Solar cells…

Check out our latest Brisbane Solar Install for Bremco Metal in Rocklea! This Brisbane based…

Power prices, the Finkel Report and your home.

Power prices are once again set to skyrocket in Queensland from July 1, with AGL,…